"I grew up working with my grandpa on a farm in Muncie, Indiana, where I learned the value of hard work and honesty. This was a place where a man's word was his bond and his handshake was as binding as the Constitution. I believe that this country is the greatest lighthouse of hope in the world. It is up to the citizens to stand up and take back control of the public policy debate. After graduating high school, I ended up at UW Madison where I received a degree in Biological Systems Engineering. There, I met my wife, Hannah. We now have two daughters, Ella and Abigail." 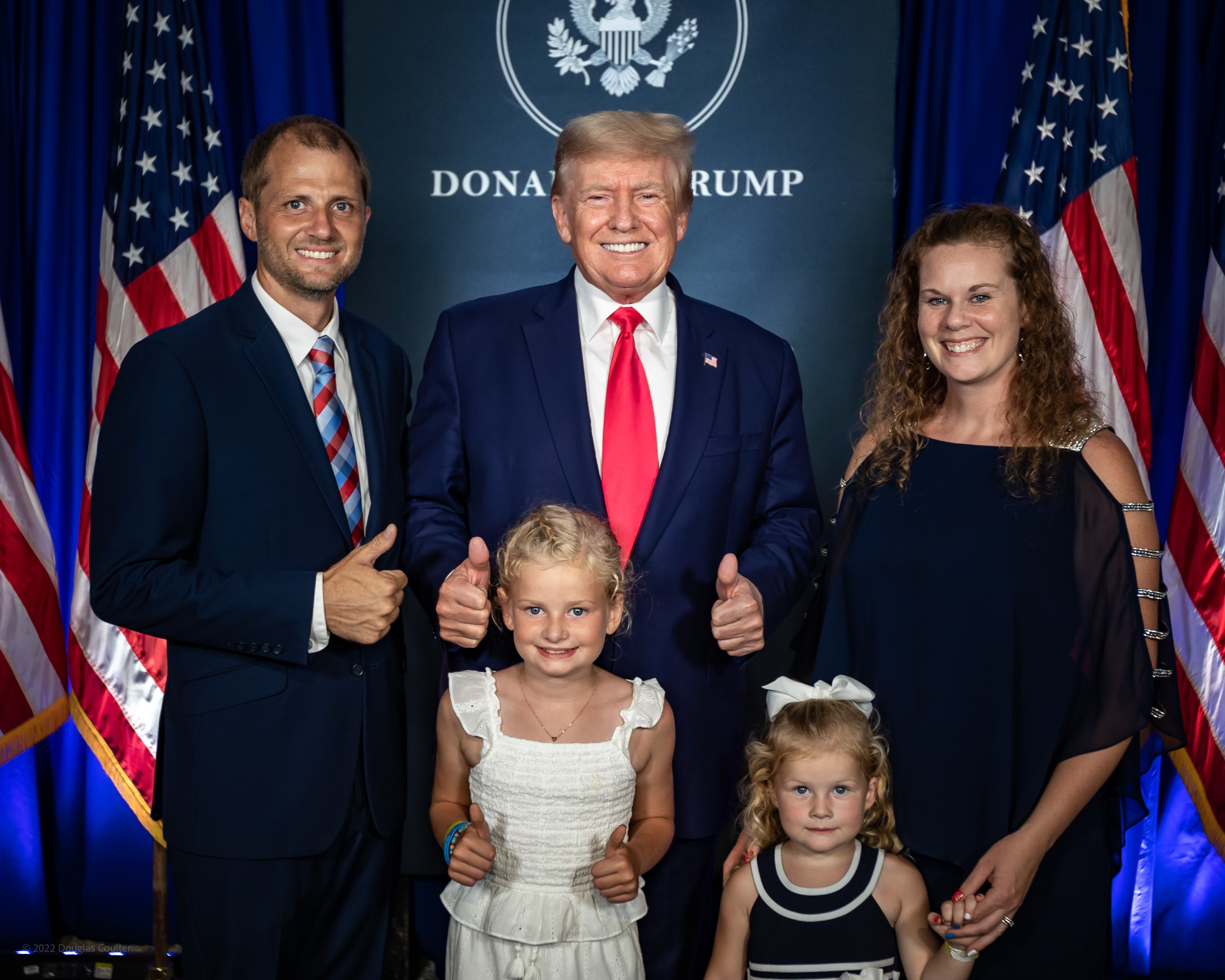 I have lived in the flyover states for my entire life. I know how hard we work to provide for our families. I watched my parents work their entire lives to support my brothers and me. This gave me the desire to give back to our community by offering to serve. We desperately need citizens to step up and serve their communities. I believe that legislators should serve for a limited time and then return to their civilian lives.

I grew up on a farm working with my grandpa. My parents worked in the housing industry. We did not have much time to slow down and relax. The costs to just survive in our businesses were so astronomical that we worked more than half of the year just to break even. I remember as a ten year old, entering accounts payable and memorizing our federal tax I.D. number. We boys were intimately involved in helping with every aspect of our family businesses: from baling hay at the farm to hauling blocks for house foundations. 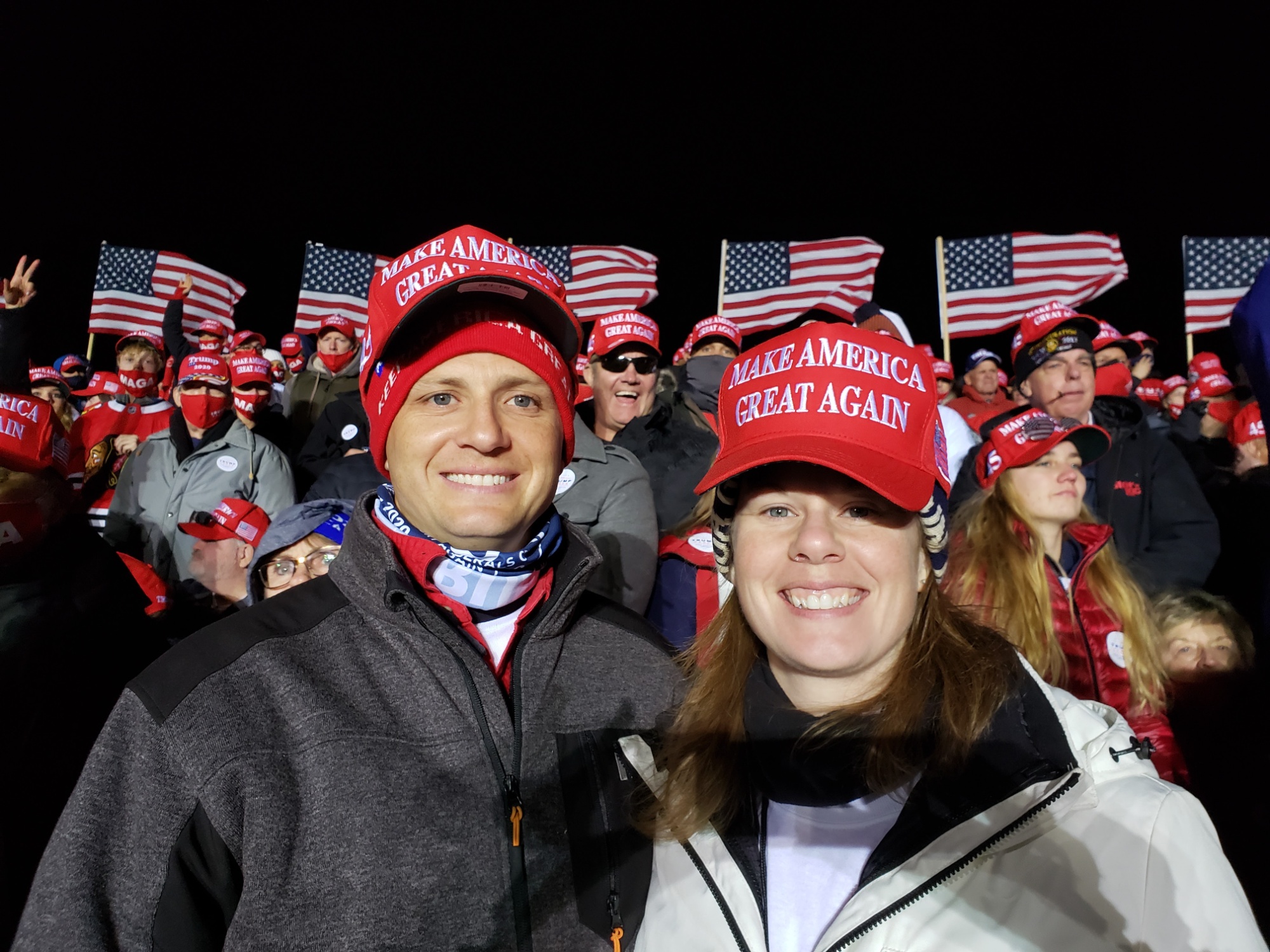 After graduating from high school, I studied at Maranatha Baptist Bible College in Watertown, Wisconsin. There, I played NCAA III soccer. Upon completion of my under-graduate degree, I worked at John Deere in Horicon as a welder on the assembly line. The time I spent on the line welding mower decks and, eventually, setting up an assembly line was invaluable. It prepared me for the next phase in my life--attending UW Madison for a second undergraduate degree.

A man is tested by the trials in his life, but the results are seldom seen right away. I was told, whether in sports or academics, that I was not good enough, or fast enough, or smart enough. Yet, I was able to push on and prevail because I knew that God had a plan for my life, and He would see it through, and He did.

I was fortunate, at UW, to have met my wife and best friend, Hannah. Together, we built a quarter scale tractor for our senior design project. Together as a family, Hannah, Ella, Abigail, and I are ready and willing to serve the people of this 63rd district.

The United States of America is the greatest bastion of hope and endless prosperity to those who embrace the values and morals on which this country was founded. One look at the most successful men and women in this country and you will find that they all embody the values laid out in the Constitution of the United States. It is here that your hard work and dedication to achieving your future goals are the determination of success, not your race, ethnicity or socioeconomic status.  We are a country of laws which allow us to succeed based on the amount of effort each of us put forth. If we are going to make America great again it must come from We the People stepping up and taking responsibility for the mistakes we have made and being willing to change course to return to the vision of our founding fathers.

For far too long, the people of this great state of Wisconsin have given up control of our Constitutional Republic. It will require the will of the people to change this problem. We have seen the lack of accountability and transparency in our government from the state capitol all the way down to the dogcatcher. We the People must stand up and take back the debate on public policy. I am willing to step out by faith and stand up for the people of Wisconsin in order to restore the voice of the everyday citizen back into our government.

We find ourselves at the edge of a cliff, and some say that the only way forward is by jumping off into doom and gloom. I would like to offer a counter to that assessment. We the People must begin the process of unraveling the tangled web of lies and seduction. A web which has been allowed to progress, unchecked, for many generations. This starts with taking back the power to administer our elections and giving it directly back to the legislature, as stated in the U.S. Constitution and our Wisconsin Constitution. I have a simple solution to the multiplicity of "issues" we have seen over the past election cycle, and it is only eight words long:

If we would implement this simple process into our voting system, it would minimize the ways by which "irregularities" are being introduced. Voting is the most sacred aspect of a Constitutional Republic. If we cannot secure this process; then we have no freedom.

This past week a direct mailer paid for by Wisconsinites for Liberty Fund was distributed throughout the 63rd Assembly District accusing candidate Adam Steen of discriminating against military voters. The mailer falsely claims, “Adam Steen’s plan prevents those serving our nation overseas from voting in our elections.”

In response to the aforementioned claim, Adam Steen has released the following statement: The blatantly untrue and libelous assertion put forward in a mailer distributed throughout the 63rd Assembly District by Wisconsinites for Liberty Fund only exposes the panic and desperation that those financially supporting my opponent, Robin Vos, are currently grappling with. Did the libelous organization responsible for this mailer forget about the Uniformed and Overseas Citizens Absentee Voting Act (UOCAVA) of 1986, in which states are required to ensure voting rights for our military members?

I 100% SUPPORT THE VOTING RIGHTS OF OUR OVERSEAS SERVICE MEMBERS! My grandfather served in the 82nd Airborne Division of the U.S. Army. Many of his friends gave their lives for this country. I find the assertion that I do not want to allow for members of the military to vote to be extremely demeaning to myself, my family, and to the many brave men and women in uniform who courageously put themselves in harm’s way to defend our freedoms as Americans, including the right to vote.

To date, Speaker Vos has displayed no public outrage for the LIES made on his behalf. Perhaps that tells us more about the character of Speaker Vos than it does of myself. It's time for a change. We must teach our children the Declaration of Independence as well as the Constitution and all 27 amendments. As a country, we, in our public schools, have allowed the slow and steady erosion of the teaching of our nation’s history. It has been said that history is bound to repeat itself. Therefore, unless we learn from our past, we will never move forward and grow. It has become apparent that a certain portion of our population would rather erase our past than allow us to learn from it. The second paragraph of the Declaration of Independence is very clear when it states:

"We hold these Truths to be self-evident, that all Men are created equal, that they are endowed by their Creator with certain unalienable Rights, that among these are Life, Liberty, and the Pursuit of Happiness . . . ."

By the grace of God, there is no one person or group that is morally superior. We are all created equal in His sight, and no man can take those rights away.

The role of our government was clearly defined by the Founders when they wrote the contract which was formed between the citizens and the government. We must not forget that the words in this contract, called the U.S. Constitution, are not archaic language which was arbitrarily written down and preserved for us to ignore. The formation of our limited government was intended to be a protection of the God-given rights of each American citizen, period. We have allowed it to grow to a point of gross, expansive overreach with unelected bureaucrats dictating details of our everyday lives.